How Do You Know if You've Been Properly Rated for Your VA Disability PTSD Claim?

As a Veteran in the United States, you might be suffering from Post Traumatic Stress Disorder. PTSD is one of the most difficult service-related disabilities to diagnose and classify.

Contrary to popular myth, PTSD is not a “processing disorder” that occurs because the victim “can’t take it.” Instead, PTSD is a chemical imbalance in the brain. Exposure to extreme stress, such as combat stress, enlarges the amygdala. This part of the brain controls emotional responses. The resulting imbalance explains symptoms you may be experiencing like depression, anxiety, hypervigilance, and flashbacks.

As you may know, the brain is adept at hiding its own injuries. As a result, many PTSD victims are unaware of the full extent of their injuries.

Your VA disability lawyer will use medical and lay evidence to address these issues. Solid medical evidence reveals the true nature of the injury. “Buddy statements” and other lay testimony from your friends and family set forth the full extent of your PTSD and how your brain injury affects your daily life.

The VA rates your PTSD disability based on statutes that outline what symptoms meeting which level of disability. PTSD is only rated at 10%, 30%, 50%, 70% or 100%. It’s important to be as honest as you can with the VA examiners about the severity of your symptoms. Please note you don’t have to meet all the symptoms in the rating level in order to be rated at that level.

For a 10% rating, the aforementioned symptoms are transient or sporadic. For example, you might have nightmares, but they do not occur every night and you are usually able to go back to sleep. Alternatively, your symptoms might be more severe, but medication either controls or eliminates them.

This disability rating is perhaps the most common one. It is appropriate if the aforementioned symptoms are worse but still manageable. Let’s return to the nightmares example. If your nightmares are more frequent and/or more severe, you might have a harder time sleeping through the night, at least on a bad day. As a result, you are groggy the next day, especially in the morning hours. At that point, the PTSD symptoms interfere with social interaction and job performance, even though you are “generally” able to function “satisfactorily.”

The first two ratings focus on overall effects. The higher three focus on specific symptoms. A 50% rating is appropriate if symptoms include:

Remember, if you disagree with your Compensation and Pension doctor’s assessment, you have the right to appeal.

At this level, you are likely struggling with maintaining employment. Holding down a job might be out of the question for you. Specific symptoms include:

Since veterans with a 70% disability rating may be struggling with employment, a Total Disability due to Individual Unemployability claim might be an option. You would have a 70% rating but paid at the 100% level due to unemployability.

Generally, you either are unable to leave your house or need constant supervision. Some total disability symptoms include:

• Gross thought impairment,
• Hallucinations and/or delusions,
• Disorientation as to place, time, and situation,
• Near-complete memory loss, and
• Danger to self or others.

Because there are so many possible ratings, your attorney might order an Independent Medical Examination to show the higher level of symptoms or to counter a negative VA C&P exam. IME physicians often reach different conclusions from VA doctors or can be more thorough in the exam report. Additionally, they often interview spouses, which can provide a more accurate picture of the level of severity of the PTSD.

Reach Out to an Experienced Attorney 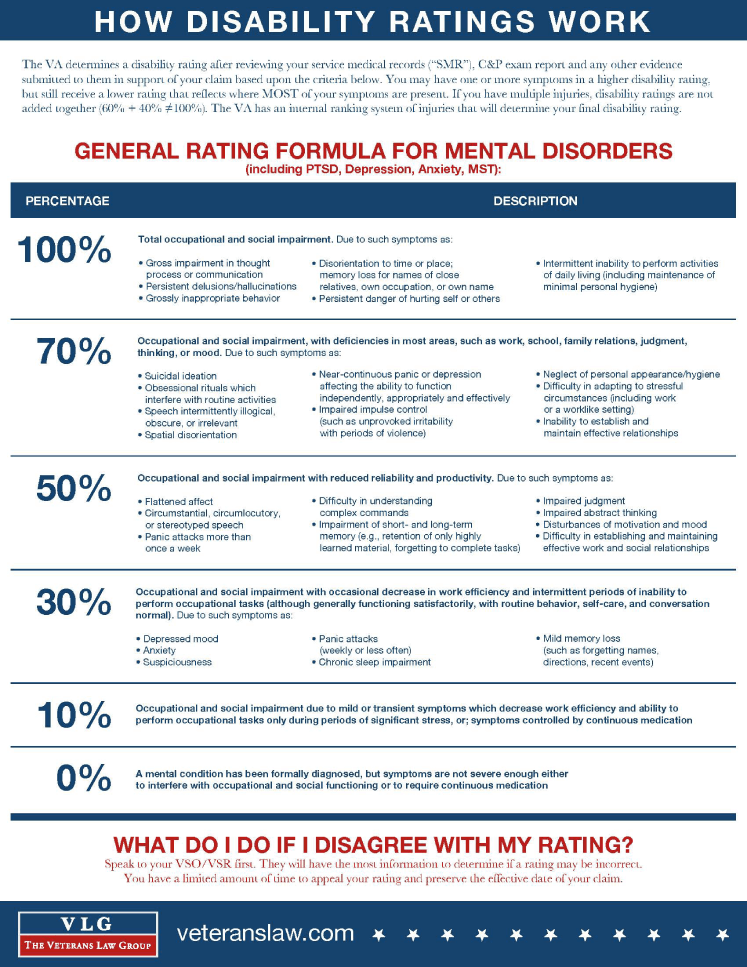